The Every Student Succeeds Act: What You Need to Know

Maybe. It takes years to determine if any overhaul to education will make a difference, for better or worse. What we do know is that the new piece of legislation, the Every Student Succeeds Act, has both similarities and major differences from No Child Left Behind.

We’ve researched the new law to break down these changes and have outlined the differences below.

But first, it’s important to know the basis for both laws.

The Elementary and Secondary Education Act: A History

In 1965, President Lyndon B. Johnson passed the Elementary and Secondary Education Act (ESEA) as part of his “war on poverty.” The act funds primary and secondary education, requires compulsory schooling for children until the age of 18, and is the supreme education law of the United States. The Act needs to be reauthorized every 3-5 years by Congress, who can make changes to the law during the reauthorization.

In 2002, President George W. Bush reauthorized the ESEA under a new name, the No Child Left Behind Act (NCLB). NCLB added the following requirements to the ESEA:

-All public schools that receive federal funding must administer standardized tests annually in mathematics and English language arts to all students from third to eighth grade, and once in high school.

-Schools that receive Title I funding (typically disadvantaged schools) must make Adequate Yearly Progress on test scores (aka the scores must improve by a certain percentage yearly). If schools do not make Adequate Yearly Progress, they are then labeled as in need of improvement and placed on probation. If scores do not improve, the school may ultimately have its entire staff replaced, be turned into a charter school, be run directly by the state, or closed.

-Each state must develop a set of standards for teachers to be deemed “highly qualified,” the ideal standard for teaching.  These standards vary per state.

-Each state must set “one high, challenging standard” for its students. The state decides what this standard is, but the standard must be set for all students in the state.

The goal of the No Child Left Behind Act was to increase accountability, improve the quality of teachers, and improve test scores. Critics of NCLB argue that the legislation caused teachers to “teach to the test,” punish teachers for poor test results without taking outside factors (such as a student’s socioeconomic status and family life) into account, and that yearly testing causes anxiety among students.

The bill passed both the House and Senate and was signed into law by President Barack Obama on December 10, 2015.

Again, the Every Student Succeeds Act (ESSA) is still extremely new and hasn’t been used in schools yet. It could take years to discover the true effects of the law on education or if all components of the law will successfully be implemented by each state. The trickle-down to each state could take a year or more to implement. But based on the law itself, here is how ESSA differs from No Child Left Behind:

1. Just like No Child Left Behind, the ESSA requires schools to test students on Math and English every year from third to eighth grade and once in high school. However, unlike NCLB, the ESSA allows states to have the flexibility on how and when they administer tests. Tests can be broken down into smaller, shorter exams. States can also seek out different types of tests and use the tests they believe most accurately measures student success. (source)

2. Under NCLB, teacher evaluations were tied to student performance on standardized tests. Under ESSA, it’s up to the states and school districts to determine if test scores will be considered in teacher performance reviews. (source)

4. ESSA will require that statistics on test scores (broken down by race, income, and disability status) and per-pupil school funding (broken down by state, district, and school) be publicly available to give parents more transparency. (source)

5. Under ESSA, states will be required to intervene in the lowest performing 5% of schools and schools with the highest dropout rates. The ESSA does not define what states must do with these schools to improve their performance, leaving this up to the discretion of the state. (source)

6. ESSA limits the federal government’s role in education and gives more power to the states and local school districts. (source)

7. President Obama’s administration gave more than 40 states exemptions to portions of the No Child Left Behind Act. The ESSA ends these waivers. (source)

What About Common Core?

The Common Core State Standards Initiative, known as Common Core, is a set of standards that defines what K-12 students should know in the subjects of English Language Arts (ELA) and mathematics. Common Core was created in 2009 by the National Governors Association (the collective voice of the nation’s governors) and state school chiefs, with additional support from outside organizations like the Bill and Melinda Gates Foundation.

The Every Student Succeeds Act specifies that the federal government may not mandate or give states incentives to adopt or use any particular set of academic standards (like the grants states were given to adopt Common Core).

It is up to the states to decide if they want to continue using Common Core standards.

The Every Student Succeeds Act is now the supreme education legislation in the United States. However, in 3-5 years, Congress and the next President may revise or completely overhaul the ESSA. By paying attention to the news on ESSA, especially op-eds written by teachers and parents, you will be able to gauge the popularity of the law and if it is at risk of revision. 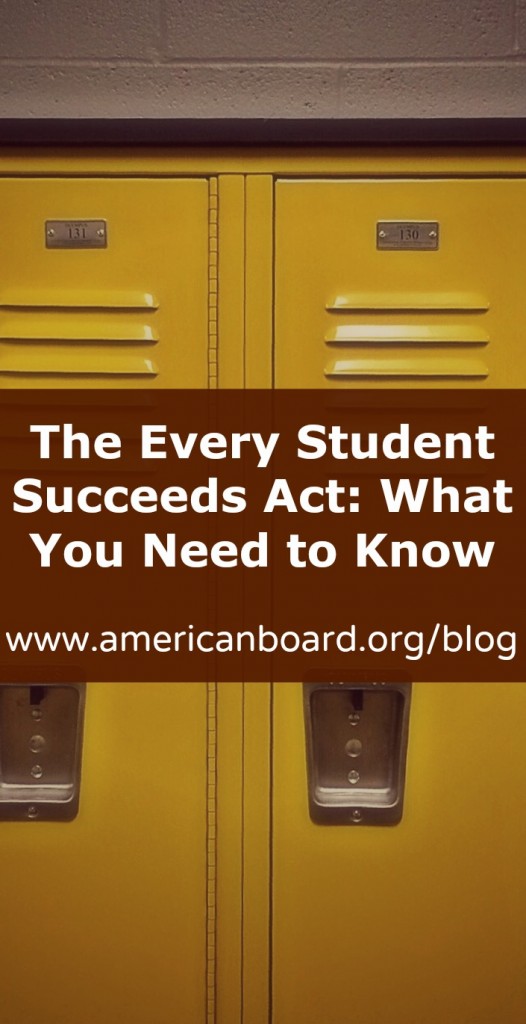 Rachael is the Online Marketing Specialist for the American Board. She enjoys blogging, social media, and DIY.